Welcome to the History of the Petbus
I started the Petbus in 2006 originally named North Island Pet Couriers.
This all happened during  the time I was  a Blue Heeler breeder (Otoheelers nzkc registered) I
had 2 litters of pups  on the ground  22 puppy's !!!  -  I normally flew my pups to their new homes but upon having a terrible experience with air travel decided to find another means of transport.

I looked and inquired but alas could not find anything - so decided to  start up a small
business / hobby, so set out and  got my goods and service license , and hit the
road  and after  just a bit of word of the mouth and people finding  out  the
business grew, not only transporting  puppies but all sorts of pets  from Furies
ones to feathers and scales of  all shapes and sizes. I have learnt a lot over the past 10 years with caring and transporting animals so you can rest assured with this experience your pets are in safe hands.
I started off hiring a van  and off i went around the north island , as business took of
then purchased a  transit van pictured below in the first newspaper article, and
after 3 years  ventured into the south island.
I began to outgrow the transit and hooked on a trailer to give me more space, but after a year the business growing by reputation I needed to get a bigger vehicle.
I brought the Petbus about 2 years ago in 2010 a big investment into the business, and it having air conditioning throughout the bus  made it  comfortable  for all the passengers and made my job a lot  more pleasant
and easier.


I love my job and my business hope to meet you and your pets
one day soon.
Kindest regards
Karyn McLauchlan -
owner operator 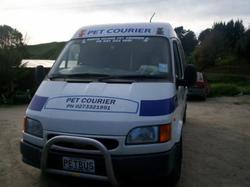 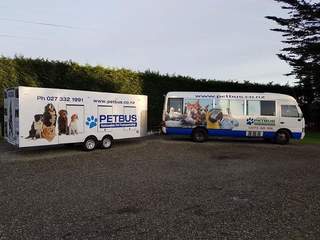 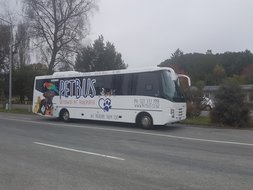 
When Karyn McLauchlan drives her Petbus
into any number of small New Zealand towns, she feels like the Santa Claus of
the animal world. "You have kids
waiting there for their bunnies, and the
bus comes and you see them get all excited," she says. "It is the joy of the
job."
But for this unique pet delivery service – which once a month embarks
on a 10-day circuit of both islands, collecting and depositing everything from
rats
to kunekune – today has brought tears, not smiles.
In a windswept
shopping-mall car park in South Auckland, the Petbus is preparing for its trail
to Dunedin (and back). Already on board are seven dogs
of varying sizes,
several parrots, a lizard and a bearded dragon, ensconced in a polyester box
with thermometer attached.
Then a woman rushes up with a caged chihuahua,
bursts into tears, and darts back to her car, inconsolable. She has sold the
dog, but after raising it for
six months, appears to be regretting the
decision. "We get tears all the time," says McLauchlan's's partner, Eddie
Chappell, stoically surveying the scene.
"When people are going overseas,
leaving their pets, they just bawl. I know my little fella there, I'd be crying
if I left him."
His dog Bandit peers serenely from the bus window,
comfortable in the knowledge that this is entirely hypothetical. He travels
everywhere with
Chappell and McLauchlan, reclining on a beanbag propped against the dashboard (McLauchlan's's dog Nellie, in a trailer behind the bus, is equally tranquil).
The mall car park is the confluence of two routes:
parked alongside the Petbus is the much smaller Northland Pet Couriers van,
which covers everything
north of the Harbour Bridge. Debbie Spridgeon has been covering the patch since February, when she quit her job as a truck driver, and invested $12,000 in an
old ambulance, which remains unchanged bar the absence of the gurney. "It's good fun," she says, as a trio of quail cower in their cage between us. And so the
crying chihuahua woman is replaced by a
delighted Raquel Christie, collecting her new bald cat from Matakana via
Spridgeon's ambulance. She has coveted one
for two years, and now she has
it. It's already – accurately – named Dobbie, a reference to the strange elf
thing from Harry Potter.
More prosaically, rat breeder Emily Heap turns up
with your standard rattus rattus, headed for a new home in Wellington on a $45
one-way ticket. The New
Zealand Rat Breeders' Association is a major client
for the Petbus.
The Petbus also gets a lot of rabbits, and the latest fad
are kune kune. The easiest to transport are birds. The worst? Poultry (the
smell). McLauchlan won't
touch ferrets, or anything larger than a big dog.
On board, the bus is noisy, but once they start driving, she assures me, most of
the animals doze off. It
doesn't smell either.
The monthly trip stops
at the same motels, the same pick-up spots – the Caltex servo in Woodville, the
fire station in Hawera, opposite the cop shop in
Taupo – before they return
home to rural Waikato. They rise three times a night to check the animals, and
the dogs are walked every two hours. At the end of the
trip, McLauchlan
says, they are "absolutely exhausted. We sleep for about three days Then she's
back into taking bookings for the next trip and working on her
latest
venture, a pet auctions website.
McLauchlan has been in the trade since
2006, when she began delivering the blue heeler pups she bred and other breeders
asked her to help them with
transport. First she had a Toyota Hiace van,
then she added a trailer, upgraded to a Ford Transit and then to a bus, and next
year she plans to buy a full-sized
coach. "It's a great lifestyle," she
says. "You get to see the country."
Six months ago, she asked Chappell to
join her. He was working in management for an electrical wholesaler: "I got out;
I'd had a gutsful of it, mate. I was
25 years in that industry and I worked
my way up to management, and it was the nine-to-five grind in the corporates
that got me. Karyn asked me to come on
board and I said `Bloody oath, let's
do it', and it was the best thing I've ever done."
"It's a relationship
tester," he smiles. "But I am lucky, she is a beautiful woman."
They
alternate roles; one will drive, the other sits in the jump seat, attending to
the animals and cleaning (about five rubbish sacks of excrement on
each
trip).
What do they talk about in those long hours on the road? "I turn the
radio up," smiles McLauchlan, who wants to make something very clear: "I'm the
boss."
They struggle to find downsides: it's tiring, there's a lot of
paperwork, the occasional travel-sick puppy. Eventually, Chappell finds two
gripes: the idiocy
of other road users, and the failure of the Cook Strait
ferry to vary the onboard movie selection (always Pirates of the Caribbean,
apparently).
And then, cheerfully, they are away – first stop Ngatea
(pigeons), and then on to  Paeroa (quail), Waihi (guinea pigs, rabbits, birds),
Katikati (chickens) and
Tauranga (a menagerie), expecting smiles to greet
them at every halt.
- © Fairfax NZ
News
Petbus  on TV   advertisment  -tvc
​
Petbus Advertisement on Southern TV 39